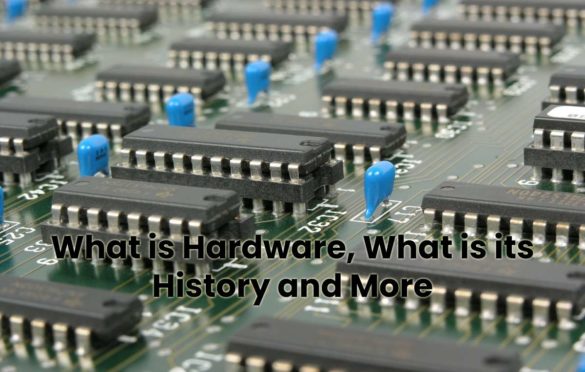 What is the hardware ? What is it for and definition

Hardware is an English word that refers to the tangible physical parts of a computer system. Everything that we can touch with our hands. We find a great variety of electrical, electronic, electromechanical, and mechanical components within it.

It is the computer chassis, cables, fans, peripherals, and all the components found in an electronic device. The Royal Spanish Academy defines it as a “Set of components that make up the material part of a computer.”

The term not only applies to computers, as it often uses in other areas of daily life. And technology such as robots, cell phones, cameras, digital players, or any other electronic device. Hardware represents a concept contrary to Software, the intangible part of a computer system: everything that we cannot physically touch.

One way to classify hardware is into two categories:

the main hardware, which encompasses the set of essential components necessary to provide minimum functionality, and on the other hand, the complementary hardware, which use to perform specific functions beyond those Basic, not strictly necessary for the operation of the computer system.

Computer hardware history can be classified into four generations, each characterized by a major technological change.

Hardware and Software How are they different?

The hardware represents a contrary concept to the Software, the intangible part of a computer system. Is anything that we can not touch with your hands as the operating system, programs and all files stored by the user, such as photos, videos, music, documents. Software is as important as hardware since, without it, a computer system would be a useless device that would be useless.

Therefore, Software and hardware work in harmony to allow an entire computer system; it is an inseparable pairing.

Also Read:What Is Cybersecurity, It Types And Its Challenges

Review What is the hardware ? What is it for and definition. Cancel reply